President-elect Barack Obama’s likely pick for Surgeon General, Dr. Sanjay Gupta, has an impressive résumé. As chief medical correspondent for CNN, Gupta has become something of a celebrity. He made the news in 2003 after performing emergency surgery on U.S. military men and Iraqis while embedded as a journalist. That same year People also named him one of “the sexiest men alive.” (There was no “sexiest consumer freedom organization” category that year, alas.) But his new job will make him one of the top public health officials in America. So we need to know: How’s his science? We dug around and found the answer: not great.
While often correctly noting that physical activity is essential to a healthy lifestyle, Gupta has naïvely given in to too many obesity myths. On a “Fit Nation” speaking tour, for example, he repeated false claims—which we’ve thoroughly debunked—that obesity is the largest health threat in America, and that it shortens life expectancy. In one interview, Gupta humbly admitted he doesn’t “have the answer” on childhood obesity, but at the same time lamented that “we have vending machines in schools.”
It’s no surprise, then, that he misguidedly supports harsh bureaucratic measures like zoning laws limiting fast food restaurants, or San Francisco Mayor Gavin Newsom’s idea to tax sweetened drinks. Both of these have been thoroughly discredited (see here and here).
Gupta also makes a habit of dishing out silly diet advice to advance mythological theories about living longer. Who knew that, despite the complete lack of evidence, abstaining from fast food could add four years to your life? (Flossing would add one more year, according to Gupta’s calculator.) He also recommends to “always be a little hungry.” (Hmm. No thanks.) At one point Gupta went out on a historical limb and called obesity “the cold war of our generation.”
Taking all this into account, it’s really no wonder the self-appointed food-cop Center for Science in the Public Interest “welcomes news of [his] nomination.”
As a CNN correspondent, Gupta has had a troubled relationship with the facts. In an otherwise passasble 2006 segment, he suggested that a “meat thermometer” can kill off the prions that cause mad cow disease (even though they aren’t destroyed by heat). This is not nitpicking; his new job description calls for someone who can  “articulate scientifically based health policy analysis and advice to the President and the Secretary of Health and Human Services (HHS) on the full range of critical public health, medical, and health system issues facing the Nation.” Gupta needs to know his stuff.
It’s true that Sanjay Gupta has sometimes walked the moderate line, and that Obama could have done much, much worse. So we will cautiously wait to see what this celebrity-physician says and does in his new position. We just hope he won’t do to public health what Oprah Winfrey did to literary criticism. 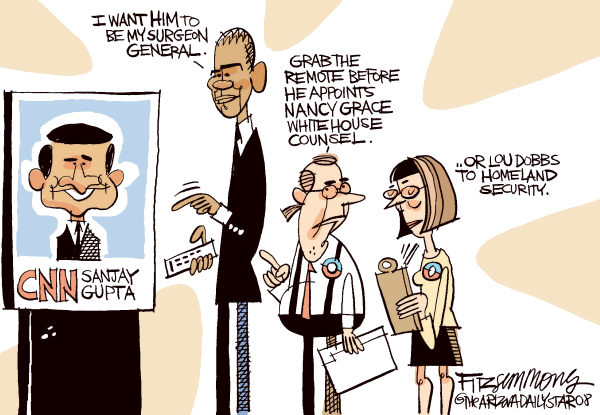