When something sounds too good to be true, it probably isn’t. In recent years, more consumers are trying meat substitutes made with plants. But they’re not made only with plants. Fake meat can have over 50 chemical ingredients—something you wouldn’t realize if you’re ordering at a restaurant.

Consumer interest in fake meat has been piqued thanks to new manufacturing techniques that give plant-based “burgers” a taste more closely resembling real meat.

But how do corporations make plants taste and have mouthfeel resembling real beef? Chemical additives. After all, veggie burgers don’t grow in the ground. They’re made in factories.

Here are some things you might not know are in that veggie burger:

Beyond Meat’s CEO says in interviews that they “just take the amino acids and the fats from another source and recreate those.” Really? Beyond Meat products also include things like dipotassium phosphate, potassium chloride, titanium dioxide, and maltodextrin.

Are the chemicals in fake meat harmful? Probably not. But many people want to avoid them anyway. So if fake meat companies or their marketing surrogates tell you fake meat is natural and healthy for you and your family—make up your own mind about whether that’s true. 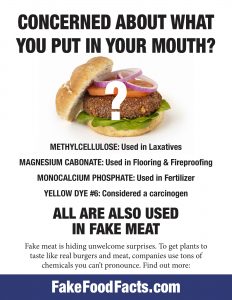 This print advertisement is just one of our efforts to educate the public about the content of fake meat. Most people do not realize how processed fake meat is and what kinds of chemical additives are used to create it.

Other efforts include digital advertising and email outreach.  We need your help to spread the word about the true nature of “plant-based” meats, so please share this article with your friends, family and colleagues.

Find out more about the consumer push to avoid processed fake meat products at www.CleanFoodFacts.com. 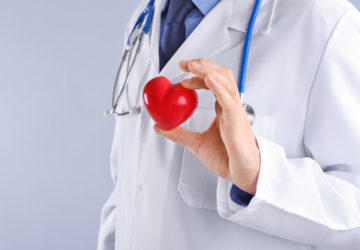 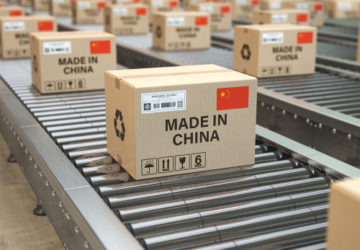 Why we should get a lot less food from China