After years of harassing people with “meat is murder” messages, People for the Ethical Treatment of Animals (PETA) recently made a surprisingly honest admission: Vegan diets kill animals.

“Does farming plants kill animals? In short, yes,” PETA acknowledges in a recent blog on its website.

Growing fruits and vegetables requires the mass use of pesticides to kill millions of birds and other animals to prevent them from destroying crops. Harvesting these crops, meanwhile, maims or kills field mice and other animals caught in the path of machines.

While PETA concedes this reality, it still insists that vegan diets remain the humane solution. Is that true, though? Vegans actually cause more harm to animal welfare and the environment than they are willing to acknowledge.

One study from Australia confirms this stark dynamic: it found that producing wheat and other grains resulted in at least 25 times more animals being killed per kilogram of usable protein than farming red meat did.

Surprised? Think about it. One cow may graze its entire life before providing hundreds of pounds of food. The production of an equivalent amount of calories using plants can kill many more animals by the means described above.

We already know the retort of many vegans: Killing millions of birds, rodents, and other animals to farm soy and kale is “unintentional.” Oh, so those animals don’t matter as much as cows and hogs? That sounds very “speciesist” to us–to use a ridiculous term PETA loves throwing around.

It’s worth recognizing that, in our interconnected world, there really is no such thing as being a vegan. Consider, for example, the fact that virtually all cosmetics and medicines were at one point tested and experimented on animals. Or think about all the animal by-products we use in our everyday lives–from tennis balls to candles. Here’s a handy list.

The next time you see vegan activists calling others names, educate them on reality. The bottom line is that vegans have blood on their hands. That’s doubly true for PETA, which has killed over 40,000 animals at its headquarters. 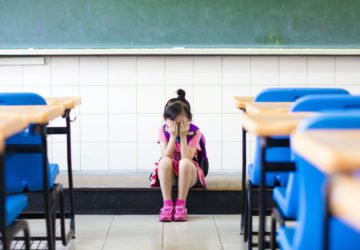 Are Your Kids Getting PETA Propaganda in School?