Yesterday, the latest People for the Ethical Treatment of Animals (PETA) employee to run afoul of the law made her get-out-of-jail-free arguments before a Virginia judge. It didn’t go too well. At the end of a 90-minute “probable cause” hearing in the aptly named town of Courtland, Virginia, PETA worker Andrea Florence Benoit stood charged with the October 2006 felony theft of a hunting dog. And we learned a great deal more about this disturbing case, and just how far PETA will go to substitute its judgment for everyone else’s.

Before the hearing even began, the prosecutor declared that he wouldn’t pursue petty larceny charges related to a radio-tracking collar Benoit removed from the dog before she put it in a PETA-owned van. Benoit’s lawyer now admits that she took the collar off, but tossed it by the side of the road. (PETA has had trouble with littering in the past, as our readers will remember.) The prosecutor also said he won’t press charges against Benoit’s PETA co-worker Carrie Beth Edwards, who now appears to have been a minor player in the alleged dog-napping.

One bombshell after another fell during the hearing. Here are just a few:

Detectives (and Animal Control officer John Thomas Cooke, who owned the dog) testified that when they stopped Benoit’s van, she lied about having taken the animal. Only after Cooke described the animal in detail did she admit it—saying “Oh … that dog. It’s in the back.”
Cooke also testified that Benoit lied about the tracking collar, saying “I have no idea what you’re talking about.”
When Benoit put Cooke’s dog into her PETA-owned van, it was wearing an identification collar with Cooke’s name and cell phone number on it. Its coat was also marked with an identifying number and with Cooke’s initials.
Criminal defense attorney Stephen Benjamin, speaking for Benoit, admitted that the dog was perfectly healthy when she took it.
Benjamin added that Benoit and Edwards “did what was, quite frankly, consistent with their training” at PETA.

This morning, PETA’s hometown Virginian-Pilot newspaper notes that in his parting shot before the judge, prosecutor Steve Edwards summarized the case as “a hound that was picked up by an organization from another jurisdiction to do who-knows-what with.” (Note: Steve Edwards is no relation to PETA employee Carrie Beth Edwards, nor to judge Robert B. Edwards.) And we’re reminding the media that “who-knows-what” may have involved deadly drugs and a trash bag.

Between 1998 and 2005, PETA put to death over 80 percent of the animals it brought back to its Norfolk headquarters. In 2005 that number was more than 90 percent.  (The group has ignored the State of Virginia’s March 31 deadline for providing its 2006 pet-killing statistics.) And in courtroom testimony earlier this year, a PETA manager testified that the group doesn’t have any facilities for long-term animal sheltering.

The next step for Andrea Benoit will likely be a Grand Jury indictment, followed by a trial in Southampton County Circuit Court. The “Class 5” felony of grand larceny (click here to see the charging document) could bring Benoit a prison term of between 1 and 10 years. And, of course, a perpetual black eye for PETA. The animal-rights group’s legal godfather, attorney Phil Hirschkop, was in the courtroom yesterday keeping a watchful eye on things (as he was this winter during PETA’s highly embarrassing animal-cruelty trial). From the looks of the evidence, he has his work cut out for him. 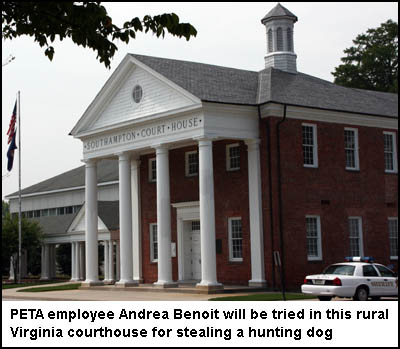