Type 2 Diabetes is the disease most often publicly associated with obesity. Food cops use the health care costs and death toll from this condition to inflate statistics for their alarmist "no food for you" campaigns. For years, anti-food-industry activists have claimed rising rates of obesity will fuel Type 2 Diabetes, producing the first generation of children with a shorter life expectancy than their parents. Dr. David Ludwig’s commentary on The Charlie Rose Show Monday night was no exception:

Perhaps a comment on Type 2 Diabetes in childhood which is an unprecedented development … It’s one thing for an obese 45 year-old to get Type 2 Diabetes at 55 and then suffer a stroke, a heart attack, renal failure, or a limb amputation at 65. The clock is starting to tick at age 10. We are looking at the prospect becoming a disease of young adulthood … It’s never happened before.

But rates of Type 2 Diabetes in children are not skyrocketing. And (as we’ve debunked before) the researchers who announced that steadily rising rates of life expectancy will suddenly drop admitted that their dire predictions were based on "collective judgment" rather than scientific evidence. In fact, a study published Tuesday in the Journal of the American Medical Association found that Type 2 Diabetes among children is "still relatively infrequent." And the accompanying editorial called it rare.
Researchers report that the incidence of Type 2 Diabetes in 15 to 19-year-olds is 11.8 per 100,000 (a small increase over the 7.2 reported 1994). Compare that figure to the 500 teenagers out of every 100,000 who suffer from anorexia (according to Primary Care for Physician Assistants: Clinical Practice Guidelines). It’s no coincidence that over the last 20 years rates of Type 2 Diabetes haven’t changed significantly, but the prevalence of eating disorders has exploded. Experts warn that over-the-top campaigns against childhood obesity are backfiring, causing kids to binge, diet, and develop eating disorders.
Earth to Dr. Ludwig: Your diagnosis is dead wrong. 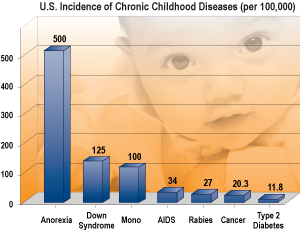