“Twinkie tax” creator Kelly Brownell has been on a years-long crusade against the dietary decisions of other Americans. Yesterday, he and fellow doom merchant David Ludwig wrote in the Los Angeles Times in favor of a soda tax, repeating the usual arguments that they (and CDC director Thomas Frieden) have been making to justify government intervention in the name of reducing obesity. 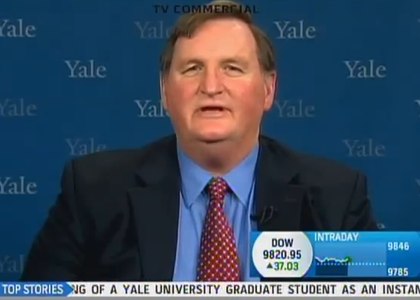 Brownell has said he wants to "get away from these arguments about personal responsibility," calling the concept of self-control a “classic dodge of the food industry.” Yet when it comes to his own weight, the Associated Press reported a few years ago that Big Brother Brownell said he got a little bigger due to snacking and less physical activity while writing his book:

He sports a good-size paunch thanks, he says, to a book project that has kept him relatively sedentary and snack-prone for the last year or so. In photographs taken a few years back, Kelly Brownell looks much trimmer.

Maybe Brownell would prefer the government step in and help him with his dietary decisions. (When he appeared on Dr. Nancy a few weeks ago to defend soda taxes, he showed that he hasn’t exactly slimmed down since the book was published.) But that doesn’t mean the rest of us can’t manage what we eat and drink just fine by ourselves. And it certainly doesn’t mean that we need the government to intervene and make food and drink choices for us. If anything, Brownell has demonstrated that personal lifestyle choices are meatier than his rhetoric on “junk food.”
In the Times piece, Brownell observes that often “states and cities take action before the federal government mobilizes” and that “California could set an example for the rest of the country” by raising the state soda tax (since, apparently, Congressmen aren’t lining up for Brownell’s tax-and-sip plan). But as one writer at George Mason University notes, the five most obese states all already have soda taxes while three of the least obese don’t.
A June 2009 review of state soda taxes also found that tax rates did not significantly affect children’s weight, and likely would not unless taxes were raised “substantially.” Translation: If states don’t jack up tax rates so that kids are forking over a month’s allowance for a can of pop, soda taxes aren’t going to result in slimmer children.
But that’s probably exactly what Brownell has in mind. Once the door is opened with penny-per-ounce tax, as he proposes, the ineffectiveness of the tax would allow him (and other public health “experts”) to call for higher and higher taxes. After all, Brownell gloats that he’s following the tobacco playbook of government control and intense taxation.
Let’s hope California legislators do set an example for the rest of the country—by advising Brownell to stay in Connecticut and buy a treadmill.