In our travels covering America’s obsession with obesity, we’ve seen a ridiculously broad (and sometimes downright comical) list of supposed causes for our collective love-handles and muffin-tops. Most of the blame, of course, has fallen on food and beverages. So if you’re munching on a bran muffin or eating a hummus-and-tree-bark sandwich right now, we completely understand. But it turns out that a smarter way to stay trim might involve nothing more radical than reading this on a smartphone while taking a walk around the block.

First it was saturated fat, then trans fat. It’s been the donuts, the cheeseburgers, the soft drinks, the high fructose corn syrup, the movie popcorn, the airport food, and the school lunches. We’ve been warned about restaurant menus that failed to lecture us about calorie counts, our “obesogenic environment,” zoning laws that allow entrepreneurs to erect new fast-food lunch counters, and even the appalling absence of extra taxes on everything that tastes good.

But today a University of Illinois researcher is pointing a fat finger in a new direction: the automobile.

“You can think of obesity as an energy imbalance,” [computer science professor Sheldon H.] Jacobson said. “People consume food, which is a form of energy, and then they expend it in their activities. But if you look over the last 60-plus years, the automobile has become our primary mode of transportation – so much so, in fact, we have literally designed our way of life around it. It is that energy imbalance that ultimately may lead to obesity.”

Yes, laying public-health problems at the feet of the automobile industry is a bit silly, but it’s actually more helpful than a blame-the-chicken-nugget approach. And if this is a ridiculously oversimplified explanation for obesity, the same should be said about everything the blame-food-first crowd has suggested over the years.

“In places like China and India, where the automobile is increasingly competing with cycling and walking as a mode of transportation, they are observing more obesity,” Jacobson added. “I am not convinced that tactical interventions like taking soda machines out of schools and adding 15 minutes of recess time will have an enduring impact.”

The bigger picture, of course, is that automobile use is just one of many reasons why we move our bodies far less than our ancestors did. In our landmark book, Small Choices, Big Bodies, we examined a long list of tiny technological lifestyle tweaks that are cumulatively responsible for the loss of literally millions of potential calorie-burning opportunities. If you haven’t browsed this entertaining report, it’s worth a download.

In Small Choices, we took note of a 2007 study that reported much the same thing as today’s University of Illinois findings, and several others that supported its basic premise:

One 2005 study found that car commuters were 13 percent more likely to be obese or overweight compared to those who walked or cycled to work. Another calculated that every 60 minutes per day in a car added 6 percent to a person’s odds of being obese, while those odds decreased by 4.8 percent for every kilometer walked. One hour spent walking briskly or cycling quickly can burn 325 or 720 calories, respectively, while sitting in a car uses only about 80 calories per hour. 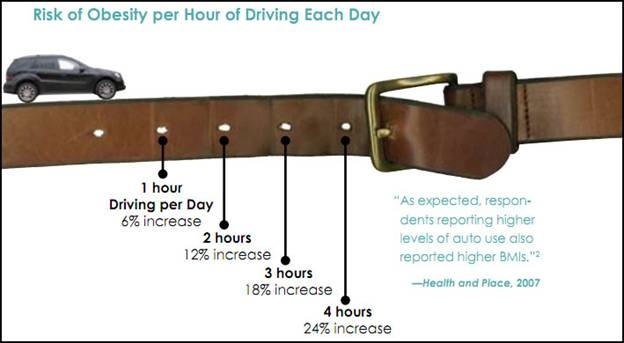 Evidence is growing that how we live contributes to obesity at least as much as what we eat. And as much as some professional obesity warriors would like to pretend otherwise, moving our bodies—and not just toward the salad bar—is our best hope for becoming a healthier nation.