The book of weak-kneed corporate leadership has many chapters, but Neiman Marcus may be the latest highlight for boneheaded decision-making.

Today the luxury retail brand announced that it would no longer sell fur in its stores as of 2023. Neiman announced the move was made in partnership with the radical animal liberation group Humane Society of the United States.

Translation: The fox is in the henhouse, and the feathers (or furs) are flying.

Neiman has surrendered its business model to activists who want to tear it apart. It was never about fur. Animal activists want to ban all fur, leather, wool, silk, cashmere, exotic leather, and any other materials that come from animals. They don’t think there’s any humane way to produce them. These activists are the folks who think honey is inhumane. They can’t be reasoned with.

They have started with fur but their incremental approach will target wool next. (Actually, they have already started.)

We polled 500 luxury fashion shoppers just recently and asked them whether stores should stop selling products because a few activists don’t like those products, or should stores let consumers choose.

A whopping 89% of respondents—Neiman’s customer base—said stores should let customers choose what to buy.

Neiman’s decision is even more ridiculous when you consider two more points.

First, some vegan activist who spends time waving “Neiman Carcass” signs at passersby is not going to suddenly start buying $1,500 handbags. The decision really has no business upside.

Second, it’s only going to encourage more attacks on Neiman. Why would the activists stop protesting Neiman, when they know the company can be bullied into submission? Neiman still sells wool, leather and other animal-derived products. Now Neiman’s leadership has put an “open season” sign on their doors.

Some Neiman customers aren’t so happy, judging by social media responses. Unlike the activists, these people won’t yell into bullhorns on the weekends. They simply, quietly won’t shop there any longer. 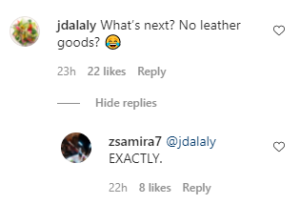 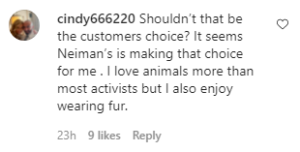 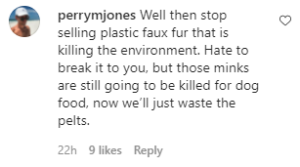 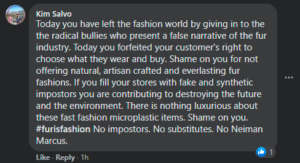