In January, “Twinkie tax” grandfather Kelly Brownell appeared in a CBS News report to give the U.S. an “F” grade in its fight against obesity. And in typical Brownell fashion, he downplayed individuals' own accountability for their weight: “The personal responsibility approach is a fine place to start. But we've been doing that for forty years now and we're losing the battle with obesity — that's been an experiment that has failed.” Standard fare from someone who’s been on a crusade to get Big Government involved in our fights with flab.

Fast forward to a profile in the Philadelphia Inquirer: Columnist Daniel Rubin recounts how a man worked 175 pounds off of his 400-pound frame through “gradual, persistent changes in both his eating and exercise regimen.” In other words, he took responsibility for his health and got the changes he wanted. In response, Brownell has his usual commentary, downplaying this instance of personal responsibility “remarkably rare”:

Brownell … says Larson has done everything right—and that is remarkably rare. "You have to be vigilant. You have to make a constant series of choices about what you eat in an environment that encourages unhealthy eating in innumerable ways, and you have to be physically active."

One-third of Americans aren't overweight. It’s hard to see how they all can be "rare." They live in the same food environment as other Americans. The difference is that they make different dietary and physical activity choices—choices Brownell apparently doesn’t seem to want to make for himself. The Associated Press reported a few years ago that Big Brother Brownell said he got a little bigger due to snacking and decreased physical activity while he wrote his book:

He sports a good-size paunch thanks, he says, to a book project that has kept him relatively sedentary and snack-prone for the last year or so. In photographs taken a few years back, Kelly Brownell looks much trimmer.

In other words, Brownell admits it was his own lifestyle choices that led him to put on weight. And on CBS News in January, he didn’t exactly look as if he had slimmed down: 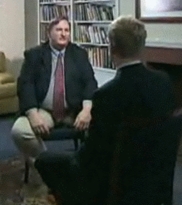 Does Kelly Brownell really think draconian government regulations like taxing cookies, brownies, and soft drinks would slim his own figure down? Sometimes, obesity “gurus” should spare us the academic theories about how we don’t have control over what we choose to eat. Perhaps the best advice we could give Brownell (both policy and dietary) is for him to shut his mouth. It doesn’t require heavy-handed government policies to do, and it works 100 percent of the time.